On April 18, the ARG staff collectively held our breath hoping to avert a downpour. Thankfully, there was only a light drizzle outside by the time the capoeira demonstration began on the garden walk outside of the Gallery.  Once the drumming and singing started, however, it became clear that nothing could dampen the mood for this event.

For those unfamiliar, Capoeira Angola is an African-Brazilian martial art and dance that evolved as a form of self-defense and cultural resistance to the oppressive institution of African slavery in colonial Brazil.  A playful sparring involving style, wit, flexibility and strategy, Capoeira weaves intricate movements, spirituality, mental and physical discipline, oral tradition, song, percussion, and philosophy into a unique “game”.

Capoeira was followed by a samba dance workshop led by the lovely and talented Angelica Cassimiro and was complete with live drumming. The 40 attendees ranged from seasoned Samba dancers, to novices, to well, the rhythmically challenged, but everyone had a blast. Participants learned to samba no pé (basic samba step) and passo marcado (simple choreographies); samba styles typical of the Rio Carnival. Angelica made it look effortless, and the rest of us were sweating, out-of–breath, but deliriously happy by the end.  Thankfully there was plenty of water and Brazilian food to refuel! 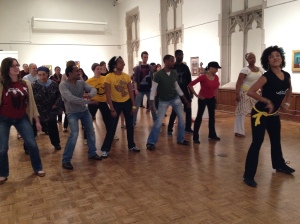 One thing I know for sure is that Samba is much more than happy music- it is the personification of joy.  And now with this demonstration under our belts we are ready for Carnival 2013! 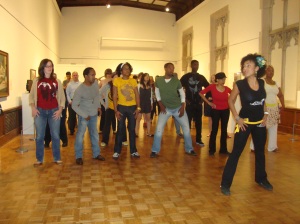 And don’t forget, you still have lots of time to see the show that inspired all of these events, Samba Sessão Afro-Brazilian Art and Film will be on view until July 29.  Don’t miss it!