For today’s 12@12 talk, our Assistant Director, Heather Moqtaderi, highlighted comments from select participants (citizen curators) who voted for artworks in our current crowd-sourced exhibition, Citizen Salon. Moqtaderi focused on the artworks installed on the two walls that face each other at the center of the gallery’s west wall. Hanging on one wall, viewers find three artworks by male artists who are heavily featured within the canon of art history, each depicting a female subject’s face. On the opposite wall hang three artworks by female artists – all accomplished but not recognized in the “textbook” sense. Moqtaderi spoke about how these two walls form “a sort of conversation between the male gaze and the perspective of woman artists.” 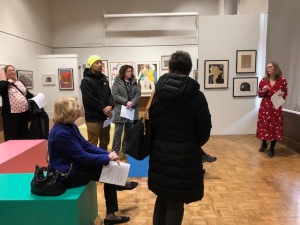 “I had no idea Man Ray made lithographs so I would love to see one of these in person.” -Rachel Wetzel

-“I choose this work because it’s interesting. Her eyes are captivating and they draw you in. You don’t know if she’s sad, watchful, or lost. She’s mysterious. Also, I haven’t seen much lithography work by Man Ray before, so I think it’s a great opportunity to display and discuss an important part of his career.” -Tina Smith

“I have always loved Man Ray’s photography and this painting has a similar impact on me as a portrait – the woman’s eyes are piercing and focused; the placement of the hands says a lot about what women are – and aren’t – allowed to show of themselves in society, which is still resonant today. She’s also classically beautiful. It’s a distinct portrait of a woman which is unexpectedly revealing, especially to be painted by a man.”
-Laura Cavender

“The figure “Julie” in the piece emerges from the background of flat, abstract, black space into a simplified form to give the viewer the expression of a woman who is shielding herself with her hands. The figure is mysterious and delicate yet holds a lot of power in her eyes. We share the same name.” -Julie Heffernan

“As someone who studies 19th century European painting, I don’t spend enough time with works on paper. This drawing has become iconic, even in its simplicity of form and subject, the work is instantly recognizable. I love that Matisse, who is known for his colorful paintings, has somewhat of a different identity with his works on paper, but we know exactly who he is in both media.” -Emma Lasry

“This work stood out to me as I was struck by the way that Matisse was able to capture so much with so few, and such simply drawn lines. There is a stark simplicity to the black line on the white paper where most of the paper shows through. However, despite the bareness of the medium, the intricate expression of his muse is apparent. She gazes sideways with her head tilted down. Her lips are pursed and almost seem to give the viewer a small smile. The quickness of the medium actually adds to her expression in my opinion, as it seems that the artist has managed to capture one fleeting moment.”
-Yasmin Gee 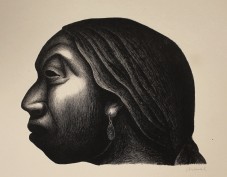 “This is such a powerful image, and so skillfully executed in the way the artist uses the color of the paper to serve as highlights on the cheek, nose, eyebrow, and ear. Undoubtedly, the current political situation makes this image feel urgently relevant today.”
-Cindy Kang

“The negative space and the side angle view are appealing. The history of the printmakers engagement with political print organizations was something I was unaware of and so I thought presenting this (hopefully with the caption) might inspire others to learn more about those histories. Finally, the fact that the artist was self-taught seems like an important component of this exhibit’s populist framework.” -Daniel Tucker

“I love that the concept was art for the people. The wealthy have overtaken the art market and it feels sometimes that we have Christie’s auctions for millions or Home Goods sofa art. This celebrates the in between.” -Joanne Murray

“When first looking at the piece I thought it was depicting a cityscape with two towers. Only the second look made me realize it was a breakfast table. I found this contrast interesting, especially with the somber and dramatic black and white shading. The breakfast table, usually a intimate happy place, takes on a new grand scale of drama and tragedy.” -Ali AlYousefi

“The light and shadows in a monochromatic palette.” -Casey Boss

“I just like the look of it – almost colorless, tranquil, interesting somewhat antique details.” -Ed Deegan

“I find this scene compelling, I want to look deeper, see what’s going on in the same way a Magritte draws one in. It’s welcoming and mysterious at the same time. I also don’t know the artist and would like to see the work of a female artist who is not a household name these days on display.” -Luise Moskowitz

“I am often drawn to early 20th century artwork, especially art that explores urban life at the time. I liked the strong lines and shadows of this piece, which give this nighttime landscape dynamic energy despite the absence of color and barely visible human presence. When I clicked, I wasn’t surprised to see the artwork dated 1931, but I was happy to see that it was created by a woman! Female artists often get left out of the conversation when we talk about modernist artists, especially artists of urban landscapes. I really hope Citizen Salon takes that into consideration for the exhibition: it’s wonderful to invite the public into the selection process, but we non-specialists are likely to choose what is familiar, and what is familiar is usually the work of celebrated men.” -Sara Davis

“I chose this work because of the moment it captures. I love that the work is centered around the moment shared by these two women in conversation but creates a dreamy and strange environment far beyond the realities of the two subjects. I also love the interior and exterior details: the portraits hanging on the wall and the countryside seen through the window.” -Lauren Altman

“The symmetry is visually compelling, with a narrative that seems squarely in the middle of the tale. The beginning and end exist in some other plane where shadows can exist as light in shadow.” -Bob Gutowski

“I am drawn to this painting because it is an interior domestic scene with a surreal element to it!” -Hannah Declercqo