On Friday, April 13 amidst the brilliant sunshine and the sizzling beat of the drum, Arthur Ross Gallery came alive with the music and the culture of Brazil in celebration of the opening of Samba Sessão: Afro-Brazilian Art and Film!  Forget Carnival. Forget Fling.  The Arthur Ross Gallery was THE place to get your festival on.

The culture of Brazil pulsated in Gallery in the form of paintings collected by John Axelrod in the mid-1990’s, which were recently acquired and conserved by the Museum of Fine Arts, Boston.  The works of art include rarely seen paintings by Brazilians of African decent, such as Roda de Samba (Samba Circle), 1957, by Heitor dos Prazeres, shown below.
The Paintings in the exhibition are juxtaposed with Brazilian film clips such as Black Orpheus and Farewell my Tasty Little Frenchmen. It is such an innovative installation, which integrates rather than separates the two media (as well as sculpture). Students from the Halpern-Rogath Curatorial Seminar, led by guest curators Profs. Tamara Walker and Gwendolyn DuBois Shaw, literally blazed a trail from Philly, to Boston, to Sao Paulo, to Rio–and there are images of their trek included in the exhibition to prove it!

The opening kicked off with outdoor drumming by Whalasa Bateria, a group of Wharton students led by Alô Brasil’s Alex Shaw.  While the infectious beats were carried across campus on an unseasonably warm breeze, a swell of students, Penn Previews attendees, Gallery visitors, and general passersby came over to investigate and enjoy. 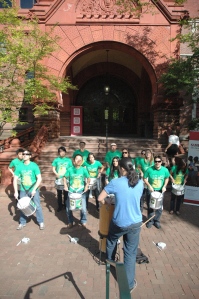 Once inside the Gallery, we got to experience Samba Sessão. The Halpern- Rogath curatorial seminar students as well as guest curators Shaw and Walker were all on hand for the unveiling of this incredible exhibition.
“In the canvases, sculptures and films featured in the gallery, we witness birth, death, love, conflict, belief, and fantasy” says curator Gwendolyn DuBois Shaw,  “We see bustling life in the big city and the slower pace of country roads side-by-side with ribald dancing and visionary rituals.  The social and cultural landscape of Brazil is brought to life.”

Adds curator Tamara J. Walker: “The past – its weight, lessons, as well as its triumphs – is ingrained into the symbols and stories at the heart of the pieces on display, and as such it provides the key to understanding them.” 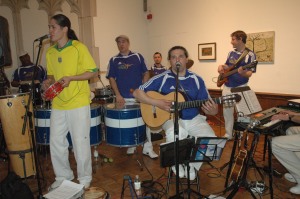 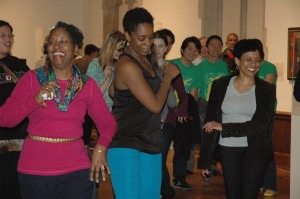 While taking in the show, over 200 attendees swayed to the rhythms of Alô Brazil, led by renowned musician Alex Shaw.  It was the kind of music that finds it way inside your soul and then bursts out, practically forcing you to move with the rhythm.  The event as a whole immersed the visitor in an authentic experience- which is difficult to present when cultures are taken out of their original context and placed in a Gallery or museum setting.

We brought just a bit of Sao Paulo, of Rio to West Philadelphia!  Come see it for yourself!